The endemic mockingbirds of the Galápagos 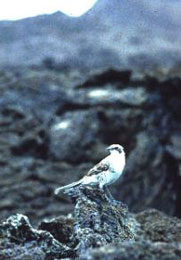 On 17 September 1835, Charles Darwin disembarked from H.M.S. Beagle in the Galápagos near Sappho Cove on Chatham Island (now known as Isla San Cristóbal). Among the first animals Darwin encountered was a bold, terrestrial mockingbird, similar to those he had seen previously in South America.

The bird is known today as Mimus melanotis, the San Cristóbal Mockingbird. During the subsequent six weeks that Darwin spent in the Galápagos, he observed mockingbirds on three other islands. The three species in his collections had a profound influence on Darwin’s thinking about geographic variation … and its causes:

Arguably, these birds had a greater influence than any other organism on the initial development of Darwin’s concept of Natural Selection.

Subsequent exploration and research revealed the presence of 4 endemic, allopatric mockingbird species within the Galápagos archipelago. I invite you to explore this web site to learn more about Darwin’s mockingbirds.