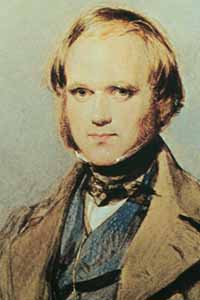 t have never had a land connection with South America or any other continent. All of the Galapagos fauna and flora got there by over-water (distance) colonization. Darwin knew that there was only one species of mockingbird in South America, but he found a species of mockingbird on each of three islands in the Galapagos, with each species different from the others. He concluded quite rightly that a single colonization of the South American mockingbird had given rise, by branching descent, to three different species on three different islands in the Galapagos. Then, he further reasoned that probably all mockingbirds in the world had descended from a common ancestor, because they are basically so simlar to each other. Mockingbirds and their relatives, like thrashers and catbirds, then presumably also had a common ancestor.

This chain of inferences led Darwin to the ultimate conclusion that all organisms on Earth had common ancestors and that probably all life on Earth had started with a single origin of life.”